On 5-6 May 2022 the "Social economy, the future of Europe" conference took place in Strasbourg, France. The 2-days conference has been dedicated to the advantages of the EU approach to social economy and it represented a great occasion for actors, networks, institutions, and organisations to meet and discuss new tools, activities, and opportunities in the field. The European Summit on Social Economy had been co-organised by the French Presidency of the European Union, the French Ministry of Economy, Finance and Recovery, the City of Strasbourg, the European Commission, the European Parliament, the European Economic and Social Committee and the Committee of the Regions.

During the event, local, regional, national, and European stakeholders had the opportunity to exchange and work on the themes that meet their interests, such as:

recognition of the social economy in the European Union

Euro Coop participated in the event giving its contribution to the workshop "How to strengthen the engagement and cooperation of farm to fork and deck-to-dish actors for a co-creation of alternative and agroecological food systems in the EU" (available here). The first roundtable had been dedicated to members working in the food system. Isa Alvarez, Urgenci’s president, highlighted the issue of the right and access to affordable healthy food for all rather than relegating the poor to eating junk food. For Community Supported Agriculture groups, Social and Solidarity Economy offer different ways of prioritising the human right to food and ensuring decent incomes for producers. In the same panel, Monika Onyszkiewicz called attention to Polish producer-consumer co-operative shops and their importance for the Social and Solidarity Economy. Petros from OpenFoodNetwork in Greece presented the concept of OFN and Open Source Software that supports the creation of contacts and relationships between local producers and consumers.

In her intervention, Euro Coop Food Policy manager, Giulia Tarsitano, stressed the crucial role of consumer co-operatives towards just-food transition. Being member-owned enterprises, co-operatives introduce in the food system balanced and democratic dynamics thanks to their alternative business model which is based on participative governance and encourages consumer sustainable food choices. Moreover, Giulia Tarsitano put the emphasis on future challenges for co-operatives in building more participative and local food systems, where consumers can be an active part of the change, ensuring a true level playing field between co-operatives and mainstream businesses in Europe and increasing the visibility of co-operatives in EU policy-design.

The second panel had been attended by a group of three different activist-researchers and clearly showed how grassroots social movements, together with proper research, can work with institutions to build bottom-up and highly relevant policy for the Green Deal.

Giovanni Esposito, from the FASS EU project, spoke about the enabling and blocking factors that they have identified in establishing sustainable food systems in Europe, while Sophie Michel from the Strasbourg University and Lena Bloemertz from the University of Basel spoke about the comparative aspects and relevance of Food Policy Councils, Plan Alimentaires Territoriales and Ernährungsrat as structures that bring actors together at territorial level to build sustainable food systems. Patricia Andriot, the Local Authorities’ network for Solidarity Economy Vice-president, spoke about how she made her local food policy council a open space for local initiatives dedicated to civil society and she stressed the importance of Local government in ensuring that public tenders are open to groups of local agro ecological and organic small-scale food producers. The final intervention came from Geneviève Savigny, who has been a member of the European Economic and Social Committee and who is herself a farmer. She highlighted the resilience and importance of building the bridge between food sovereignty and Social and Solidarity Economy.

The closing plenary session was an opportunity to draw conclusions about all activities carried out during the entire event and it brought to light different points on how Social and Solidarity economy could lead the way in building the future society. 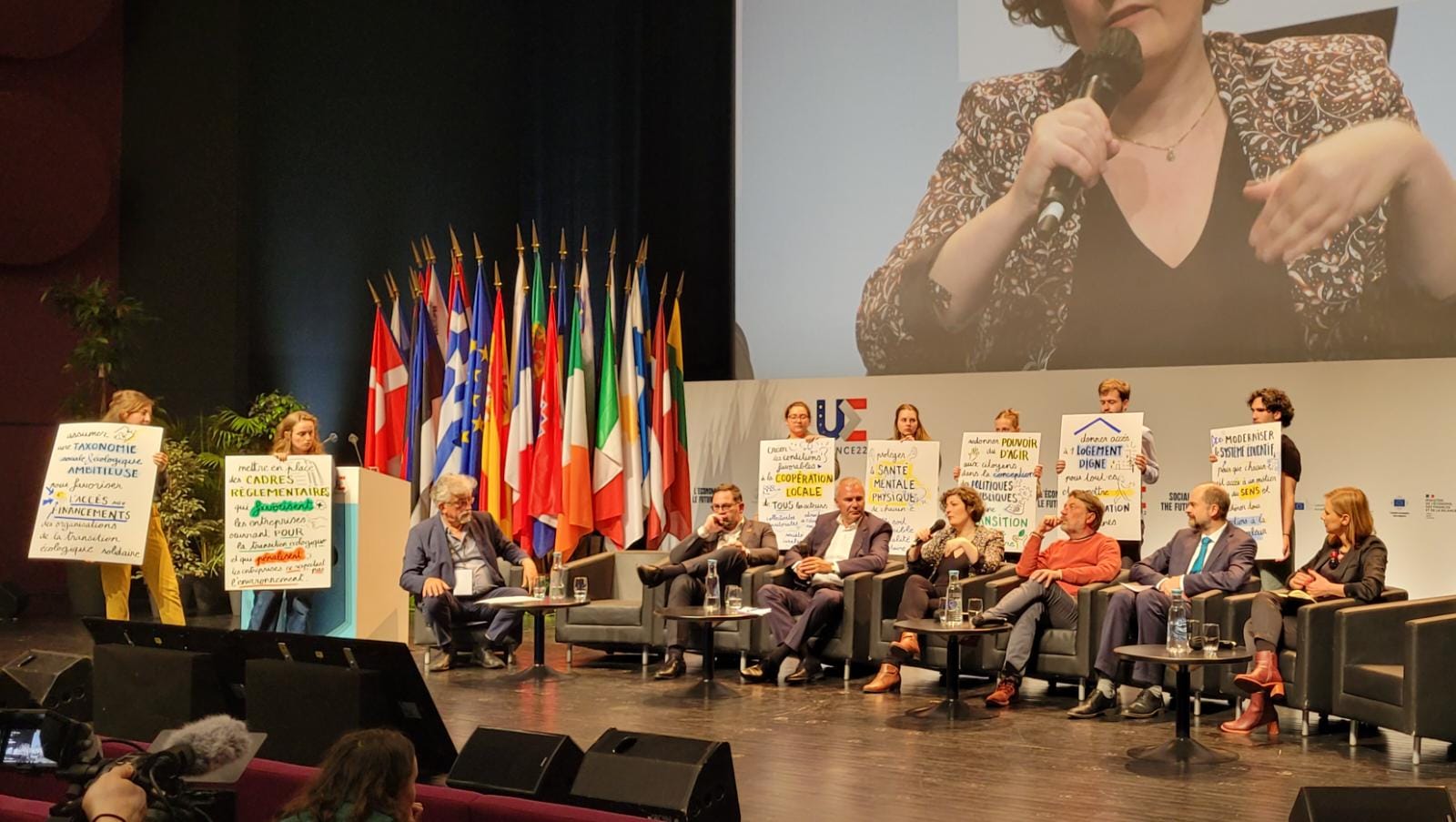 On this occasion, participants discussed the crucial role of cooperation at the local level and the importance of innovative tools and approaches in the educational system. In addition, Social and Solidarity economy’s means can ensure people's mental & physical health, as well as fair housing and inclusiveness. Moreover, social economy represents the keystone to strengthen economic and social development and increase democratic participation promoting alternative cooperative models for the development of people empowerment. In addition, participants agreed on the central role of social economy towards the green transition and highlighted how it can empower local communities and institutions in guiding the just transition with a bottom-up approach: the creation of a taxonomy framework can give access to financial support for organisations with positive externalities on the society and the environment, as well as legislative initiatives can promote social and solidarity business actors while penalising those with negative sustainability impact.

In these testing times, consumer co-operatives stay true to their values of self-help and...