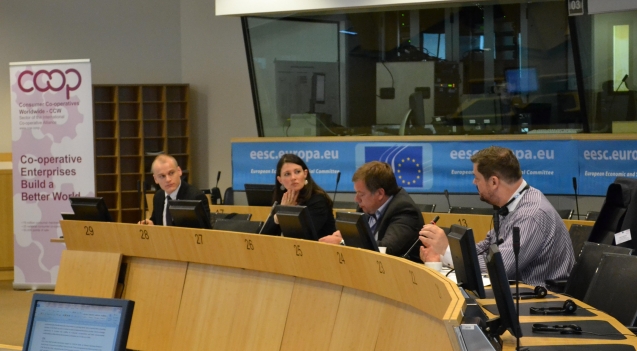 On April 19, Euro Coop and Consumer Co-operatives Worldwide (CCW) joined forces and organized a Consumer Co-operative Summit, which included a Euro Coop Board Meeting, the first for 2016, and a joint Euro Coop/CCW Global Conference on “Coop e-commerce and Coop Products”. The venue was the European Economic and Social Committee.

Euro Coop’s Board Meeting saw members engage in statutory business –Budget 2017, initial discussions for the Association’s Draft Strategy for the period 2016-2018, and the 2015 Annual Activity Report – to be published in June at the Euro Coop General Assembly.

The Joint Euro Coop/CCW Global Conference brought together representatives of consumer co-operatives throughout the world, who engaged in a fruitful exchange of good practices and who shared their challenges and successes alike in two mainstream areas for consumer co-operatives today – conventional retail with COOP products and e-commerce. The first panel titled “COOP Products: Serving Members” addressed the issue of communicating the co-operative distinctiveness through own-branded products and opportunities for building Coop2Coop trade with an accent on Coop-branded goods. The second panel, “COOP e-commerce: Technological Solutions & Opportunities for Growth” saw members discuss development of innovative digital services to the benefit of consumer-members, as well as the implementation of cloud systems for back-office operations.

The Conference was opened by Petar Stefanov – CCW President who stated the overall vision of co-operatives by going back 170 years to the establishment of the modern consumer co-operative movement. The 28 Rochdale Pioneers posed the following questions: shouldn’t the economy serve the people, instead of the people serving the economy, and how that would look like if it were to happen. They then moved on to answer the question themselves by taking the initiative, with a certain degree of risk, but their firm belief in the co-operative principles and values guided them to successfully realizing their objective. Moreover, their progressiveness inspired thousands of follower and supporters of the co-operative idea, which resulted in the rapid growth of the co-operative movement in the past 170 years. Today, Consumer Co-operatives Worldwide (CCW) brings together 28 national organizations, who represent 75.000.000 members, and through their economic activities, combine for a total annual turnover of $ 500 billion.

One of the Conference’s highlights was the Keynote Speech, delivered by Luca Jahier, President of Group III: Various Interests within the European Economic and Social Committee.Mr. Jahier emphasised the benefits of the co-operative model for society especially in providing a participatory system which safeguards democracy and promotes social responsibility. He outlined the political dialogue on EU level in the past 10-15 years, which was initially marked with a strong support for the social economy and model of business during the Barroso years, but with time a growing resilience surfaced against the multi-business model system, making structural change more difficult within the EU. However, President Jahier stressed that co-operatives have unique assets – their structure, culture, and history – which must be utilized by co-operatives so that they become the leader within the social economy sphere, as this would contribute to gaining more recognition by decision-makers. In his opinion, this recognition is overdue because in the past 8 years of crisis, the only model of enterprise which has registered any growth, regardless of which sector of the economy, was the co-operative enterprise.

Here, President Jahier believes the International Co-operative Alliance has a vital role to play as the organization which consolidates the global co-operative movement and therefore, it is responsible for maintaining the movement’s strong social responsibility profile, as well as ensuring that co-operatives worldwide speak in one voice – an area where more needs to be done. In particular, consumer co-operatives in Europe and globally must work with their 32 million and 75 million consumer-members, respectively, in order to meet the needs of the local communities they serve and operate in. In conclusion, President Jahier stated that, overall, the welfare state is at stake and co-operatives are the closest entities to the people and thus best placed to harness the changes powered by citizens and work with them in their search for more democracy, solidarity and fairness.

Monique Leroux, President of the International Co-operative Alliance, as well as Dirk Lehnoff, President of Cooperatives Europe were also in attendance. President Leroux thanked Petar Stefanov for the invitation and the opportunity to get better acquainted with the latest works of CCW members. She is delighted and impressed to see that consumer co-operatives are actively working and collaborating amongst each other in finding better ways to serve their members through co-operative conventional retail and e-commerce. In her mission as ICA President, she looks towards working closer with the global sectoral organizations and she sees a great opportunity for CCW to establish a global supply chain and Coop2Coop trade (from producer to consumer), the successes of which will be a crucial contribution to the objectives of the ICA Blueprint in making the Co-operative Decade 2020 a reality.

Dirk Lehnhoff also thanked President Stefanov and shared his excitement to see consumer co-operatives successfully managing the challenging balance between remaining competitive and while maintaining and growing their social responsibility. Knowing consumer co-operatives well in Europe, within the framework of Cooperatives Europe and their close relations with Euro Coop, Mr. Lehnhoff attributes a great responsibility to them in the shared mission of representing the co-operative model of enterprise, with its successes in social responsibility, inclusive growth, and democratic local participation, towards the EU decision-makers.