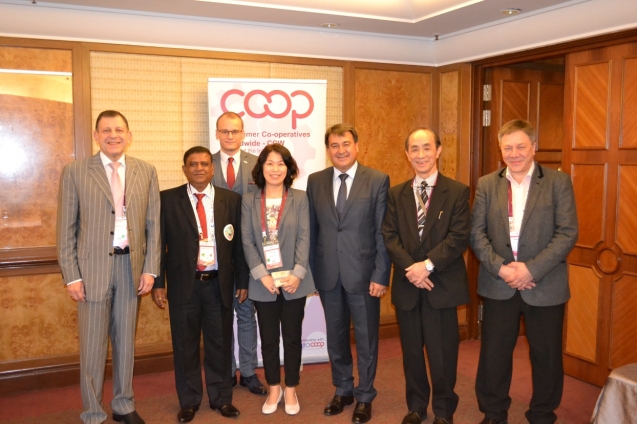 CCW held its 2017 Elections General Assembly and Joint Seminar with the ICAO "Building Direct & Sustainable Supply Chains" within the framework of the ICA Global Conference and General Assembly. CCW also participated in the Joint Strategic Session between the Alliance Board and all regional and Sectoral leadership to discuss possibilities for joint strategic planning of common objectives for the global co-operative movement. It was a very busy and productive week for our sector, the climax of which was the election of CCW President Petar Stefanov as an ICA Board member for the 2017-2021 mandate.

The General Assembly was held on 14 November Assembly was attended by 10 national member organizations and another 10 were represented via Proxy. With a total of 20/26 members represented, all decisions and deliberations were valid. The host organization – ANGKASA – the Malaysian National Co-operative Movement was represented by Vice-President Dato’ Kamarudin Ismail, who attended as observer.

The highlight of the Assembly was the elections for President and Executive Committee for a new four-year mandate, which was extended from a duration of two years, following the Assembly’s approval of amendments the Organisation's Statutes. These changes were called upon by recommendations of the Alliance Board with the aim of streamlining the global sectors' Rules with those of the Alliance. This is part of an overall effort to ensure higher degree strategic planning between the Alliance, its Regions and Sectors.

The elections results are: In his inception speech, President Stefanov shared his view of the role of consumer co-operatives today: "The challenges facing consumer co-operatives in the world today are greater because of the extraordinary dynamics of new technologies, global crises, open markets, excessive trade and excessive consumption. In this context, co-operative leaders play an important role in preserving the essence of our business model, which provides adaptability and flexibility in solving many social problems and economic challenges and thus helps create a better world."

Other statutory business included the approval of the 2015-2017 Activity Report, Financial Report and initial discussions for the 2018 Work Plan and Budget.

CCW and ICAO – International Co-operative Agriculture Organisation organized and held a joint session on 16 November 2017 within the second day of the Alliance Global Conference. The theme was “Building Direct & Sustainable Supply Chains”, which explored the successful practices on national level of direct collaboration between agricultural and consumer co-operatives.

The Session was opened with key messages by Prof. Petar Stefanov – CCW President and Ki-hoon KIM – Deputy Secretary General of ICAO and NACF – National Agricultural Co-operative Federation of South Korea. Prof. Stefanov highlighted the vital importance of scaling up co-operative trade opportunities, as this would create additional opportunities for growth for co-operative enterprises. Consequently, this would have a three-fold effect: 1) support for the true social economy, which was established over 170 years ago by none other than co-operatives; 2) position co-operatives as appropriate partners to national governments in the fight against the grey economy, and 3) generate a real contribution to the UN Sustainable Development Goals, since co-operatives have an inherent commitment to sustainable development. The case studies of direct supply chains on national level included: Bulgaria, Japan, Malaysia, Sweden and Uganda. In conclusion, an interesting presentation was made by a consumer co-operative start-up within the network of Central Union of Consumer Societies – Centrosojuz, Russian Federation, which has created an online platform “Coop Connect” with a wide infrastructure to connect digitally the co-operative movement on international, national, regional and local level. One of the platform’s modules allows the creation of an online marketplace, where agricultural co-operatives could directly connect with consumer co-operatives and thus reinforce the establishment of direct supply chains.

The climax of the memorable week was the election of the CCW President onto the Alliance Global Board for the mandate 2017-2021 as one of the four sectoral representatives. Following the approval of amendments to the Alliance Statutes and By-Laws, the global sectors were given four representatives on the Global Board for the first time ever. This is a significant increase from the previous two representatives. The increased role of the global sectors in the work of the Global Board is seen as an overall effort to guarantee more expert and technical input in the strategic objectives of the Alliance. It would also ensure a greater degree of convergence in the planning amongst Global, Regional and Sectoral level. Other than CCW, the other three sectoral representatives are:

The ICA’s General Assembly in Seville heard from Illia Gorokhovskyi, the Chair of Coop...