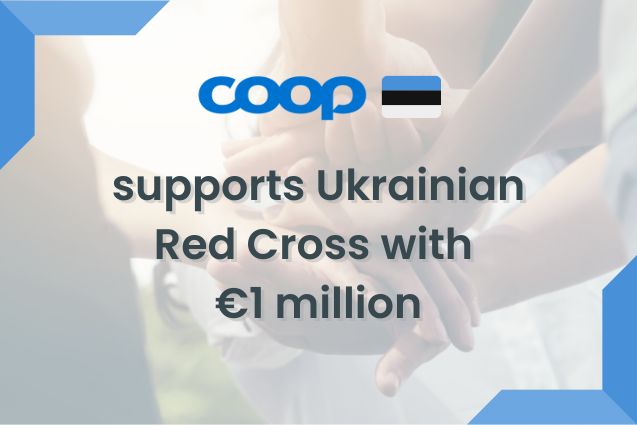 The Estonian Coop cooperatives and Coop Pank support the operations of the Red Cross in Ukraine with €1 million to help people affected by the war with basic necessities.

According to the Estonian Red Cross, Coop cooperatives and Coop Pank support the Ukrainian Red Cross network, which has 4,000 volunteers on site to help the population. The needs of Ukrainian people vary from region to region – there are shortages of clean water, food, hygiene supplies, clothing, etc. Donations will also be used to set up camps for war refugees across Ukraine.

Coop Estonia stands with Ukranian people and it wants to do its part to ensure that the necessary assistance quickly gets to those in need. In addition to the donation, Coop Estonia suspended its cooperation with Russian and Belarusian producers, it stopped working with Russian TV channels and Ukrainian products will soon be highlighted in its stores and e-shop. Moreover, Coop Pank allows its clients to make free payments to Ukrainian banks and Ukrainian residents can open bank accounts free of charge.

The 19 Estonian regional Coop cooperatives form the largest food and grocery chain and their shared mission is to sustain and advance life in every corner of the country. Coop’s turnover in 2021 was €752 million, which increased out market leader’s position to 24.7%. Coop Pank is the fifth largest universal bank in Estonia, with 117,600 day-to-day banking customers and 28,000 shareholders. The strategic owners of the bank are Coop’s regional cooperatives.