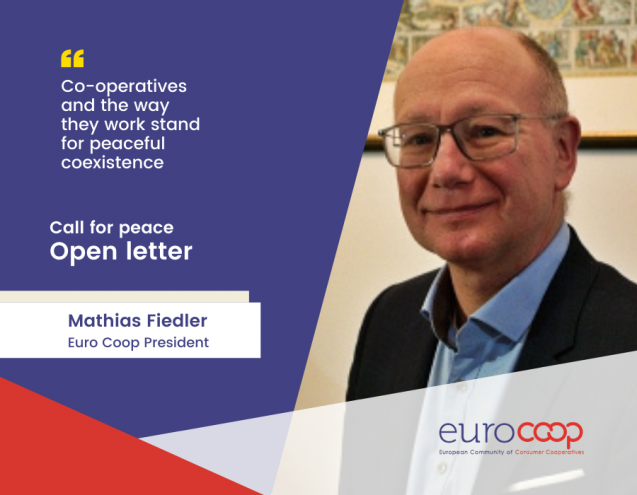 The European consumer co-operatives are very concerned about developments in eastern Ukraine and hope that a way can be found to stop the war and resolve this crisis through diplomacy.

Co-operatives and the way they work stand for peaceful coexistence, for co-operation, as explicitly stated by the General Assembly of the International Co-operative Alliance yet again in Kigali in 2019. Peace is an essential prerequisite for productive coexistence.1

Co-operatives, and consumer co-operatives, in particular, put individuals and their needs at the forefront of their activities. Consumer co-operatives connect people, regardless of origin, religion, gender or nationality. As a neutral non-governmental organisation, we are particularly concerned about the people who are threatened by further escalation. Life, health, property, the supply of essential goods is acutely threatened. Warlike conflicts always have a considerable impact on the civilian population, so war must be avoided.

As an organisation representing both the Ukrainian and Russian consumer co-operative movements, we call on all leaders not to slacken in their efforts to return to diplomacy.

Equal opportunities in COOP Jednota: almost half of management positions are held by women

The percentage of women working in retail sector is growing faster in recent years and COOP...

The Estonian Coop cooperatives and Coop Pank support the operations of the Red Cross in...