HISPACOOP publishes study on consumers’ behaviour when purchasing food, using it at home, and disposing of the packaging 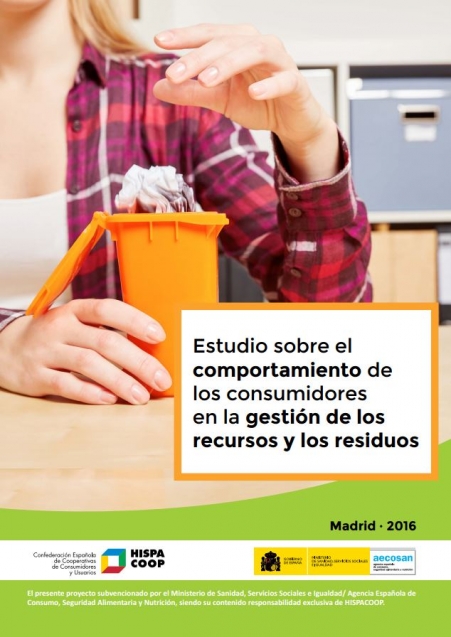 Euro Coop’s Spanish member, HISPACOOP, has produced a study on “The Behaviour of Consumers in the Management of Resources and Waste”. It looks at consumer behaviour in relation to food, packaging and recycling. The analysis looks at the time of purchase, the functionality of packaging, the generation of food waste, the management of packaging in the home in the post-use phase, and how waste is dealt with. A combination of qualitative and quantitative methods were used in the research, with a combination of focus groups and telephone survey of 2,002 people.

Environmental criteria is an afterthought for most consumers

What consumers expect from packaging

Consumers rank packaging which extends the shelf life of food as the top priority, followed by it being easy to open and its usability. Resealable packaging was ranked as a third priority.

There are some interesting findings related to food waste. Consumers think that wasting food is wrong, but also very much associate it as a consequence of the hustle and bustle of modern life.  As well as reasons related to lifestyle, food also goes to waste in the home because of absent-mindedness, not knowing how to use leftovers, and because of being incorrectly stored. Consumers want to change this, but find it difficult to envisage collective or individual solutions.

The least food waste is generated in low-income households. A geographical correlation was also found when it comes to how much food goes to waste.  The likelihood of food ending up as waste is highest in the two biggest cities, Madrid and Barcelona.

Lack of space, carelessness and confusion all act as barriers to recycling

Consumers were found to understand the importance of recycling very well, and this is reflected in the number of people who make an effort of recycle. The majority of consumers do recycle; 86.2% recycle glass, while 83.7% recycle paper and cardboard.

The majority of survey respondents stated that they didn’t have doubts about how to recycle. However, in the practical part of the study, mistakes were observed when people had to select which container they should use.

A lack of space in the home was shown to constitute one of the main difficulties for recycling, but carelessness and confusion were also noted as barriers to recycling.

The habit of separating one’s waste was found to be associated with being an urban dweller in a big city. An association was also found between people with lower incomes and having a lower tendency to recycle.

The study highlighted some problems with deposit return schemes, namely that using them can increase the number of bins required in the home, and the additional space required for these; that the packaging has to be in excellent condition; and the practicality of only being able to return packages during business hours.

The full study is available here in Spanish.

Euro Coop has submitted feedback to the European Commission on the draft delegated regulation...

One Year into the Pandemic - Consumer Co-operatives' Stocktaking

Despite the health emergency and economic crisis, consumer co-operatives contributed and adapted...

Coop Sweden is now launching the digital receipt - a more sustainable, flexible and...