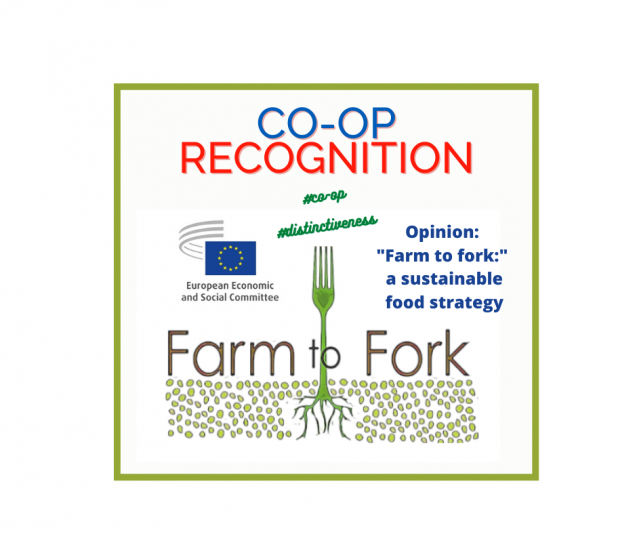 In parallel to the acknowledgment of the role of consumer co-operatives in the shift towards sustainable consumption in the European Economic and Social Committee (EESC) own-initiative Opinion “Towards an EU strategy on sustainable consumption”, further recognition for our members’ efforts was made in the Committee’s Opinion “From farm to fork: a sustainable food strategy”, which references consumer co-ops as key enablers for farmers to receive added-value and price premium for their produce, especially when it is based on organic and other environmentally-friendly processes.

Consumer co-operatives are lauded for their special role in building short supply chains and their presence in rural areas – where they are often the last retail operator standing – which contributes to fostering local employment, revitalisation and overall resilience, and in the process builds consumer trust and transparency in the food system.

As referenced in the EESC Opinion on sustainable consumption, consumer co-ops’ were recognized for their unwavering commitment to consumers and citizens in educating and raising awareness of crucial issues pertaining to food sustainability, such as food waste and fighting obesity, especially among children.

Overall, the document is the EESC rection to the EU Commission Communication and Action Plan on the Farm to Fork Strategy (and not to the final strategy document, which was published more recently) and puts forward a well-balanced critical analysis of the pros and cons of the Commission proposal. Its opening statement calls for enhancing the stability in the food systems and the reshaping of supply chain dynamics to generate improvements for producers, processors and retailers. A criticism towards the Commission is their forgoing certain actions deemed critical and of strategic importance by the Committee, such as:

The Committee further states that the green transition cannot be achieved with a decrease of the CAP budget and further advises to make funding to Member-States conditional to their national plans for developing a commensurate healthy and sustainable food environment.

The issue of fair food prices along the entire supply chain is also addressed, as the need to redefine EU trade policy targets. A wise proposal made by the EESC, and welcomed by Euro Coop, calls for an impact assessment to be carried out by the Commission on every single target within the F2F Strategy.

Last but not least, the Committee once again proposes, as it has done numerous times in the past, the creation of a European food Policy Council to galvanize operators across various spectres and develop solutions to common challenges facing the supply chain, including reconnecting rural and urban areas. Local food councils exist, and consumer co-operatives are prominent contributors, which is why Euro Coop fully applauds this proposal and we voice our readiness to contribute to the work of a future such initiative at EU level.

Consumer co-operatives are mentioned in the following Opinion texts:

4.2.4 – Farmers' markets, Community Supported Agriculture (CSA), consumer cooperatives and other short supply chain initiatives provide a crucial avenue for farmers to increase added value and receive fair prices, particularly for those practising organic farming or applying other environment-friendly methods that are not covered by a label. Local and regional authorities are often involved, putting local food governance systems in place that bring together the various players concerned and, in particular, fostering the use of local produce in mass catering. The EESC deplores that its previous opinions have not been followed by the Commission in this regard.

4.2.5. – This re-localisation fosters jobs and local dynamism. It also increases resilience, as shown by responses to COVID-19 at all levels of the supply chain (producers, processors and retailers). Rural areas are one example of a domain where consumer cooperatives are usually the last business operator standing. For consumers, short supply chains offer a source of fresh, high-quality produce that is enriched by its history and the human relations involved, and acts to stimulate interest and educate people about the value of food, as well as rebuilding trust in food systems. Solidarity-based, cooperative initiatives also play a key role in developing educational materials for schools and vigorous awareness-raising to combat food waste and obesity, especially among children. While the benefits of short supply chains are recognised in the Farm to Fork Communication, concrete actions and allocations of funding (including in CAP strategic plans) are required to further develop these chains and remove all barriers to their flourishing across the EU.

This is a breakthrough achievement for consumer co-operatives as to be explicitly featured in an EU Opinion gives way to further recognition for our model of enterprise within the EU policy process and facilitates further Euro Coop’s efforts in providing know-how and expertise for achieving the transition to sustainability.