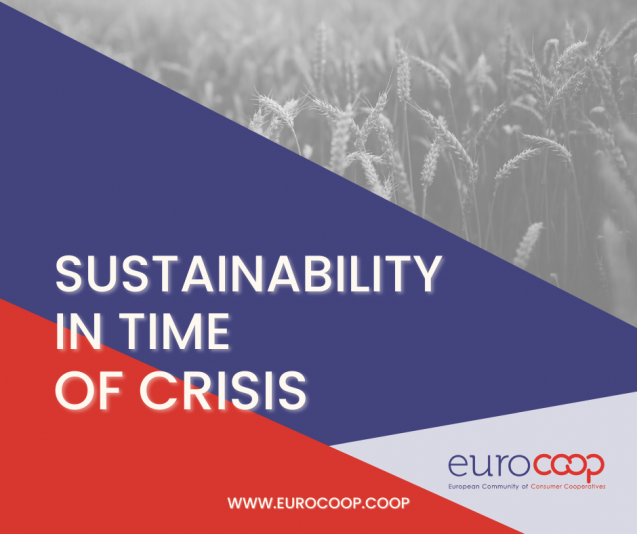 Since its inception, the new Commission led by President Ursula von der Leyen committed to set up a series of actions aimed at urgently tackling the environmental crisis.

The Farm to Fork Strategy (F2F) represents the conceptual framework for the implementation of sustainable food production with the aim to reduce the overall environmental impact of food production, trade, and consumption. The Commission announced these measures at the very beginning of its new mandate, as necessary responses to address climate change and biodiversity loss.

In other words, the Commission acknowledges as detrimental the way food has been produced for decades.

Monocultures are highly profitable and are replacing natural habitats with intensive agriculture, which has caused the steep decline in endemic species of flora and fauna. In addition, the expansion of arable land fragments natural habitats further, reducing biodiversity.

Here are some facts and figures:

Intensive agriculture is responsible for 21-37% of the total anthropogenic emissions of GHGs and, in EU alone, it accounts for about 11%.

Animal farming represents the largest source of GHGs in agriculture with feed digestion accounting for the 78% of livestock emissions with the remaining 22% originating from manure storage.

Beef and dairy cows account for 77% of livestock emissions, and the current measured trend does not indicate any meaningful reduction.

Chemicals such as fertilizers and biocides (i.e. pesticides, herbicides, fungicides) are associated with serious environmental and human health concerns.

Groundwater contamination further reduces availability of drinking water, which is already under threat by overexploitation of wells and by climate change.

Use of nitrogen fertilizers leads to the release of nitrogen dioxide, a dangerous pollutant and GHGs 300 times more powerful than CO2.

Nitrogen dioxide (N2O) emissions from agriculture account for some 43% of the sector and 3.9% of total anthropogenic emissions in the EU.

Although more recent statistics showed a slight reduction in the use and risk of pesticides during the last two years, the EU still uses over 350,000 tons each year.

On the other hand, changes in consumer habits have spurred the expansion of organic and agroecology farming, which mitigates some of the negative impacts of conventional farming.

With a surface increase of approximately 56% between 2012 and 2020, the organic farming market is showing steady growth.

The Commission’s 2030 goals to cut 50% in pesticide use and risk, 30% in nitrogen deposition, and increase organic farming to cover 25% of arable land usage, seem to be logical actions to address the environmental consequences we are facing. This vision though was not shared by big food producers and other countries such as the USA, whose food production relies more on technical solutions rather than preventative measures.

Since its launch, the F2F proposal, received criticism as regards its feasibility and, since the start of the war in the Ukraine, there is a renewed wave of opposition against it.

Contrary to its claims, and possibly, wishes, the Commission finally postponed with no clear date the revision of the legislation on the sustainable use of pesticides and on nature restoration that formed an important part of the Farm to Fork Strategy.

At the end of March, the Commission surrendered to the claims that the ‘already overambitious program’, could not be implemented because of the importance of cereals production (particularly wheat) in Russia and Ukraine.

The decision was taken even though some 400 food and agriculture scientists from across the EU signed a letter highlighting how imperative it was to urgently implement the greening of our food systems, not only for social reasons but also for food security given the possible production crisis.

The Commission has not presented any facts or figures to support its decision. We do not know how postponing the proposals will help with the estimated shortage on the EU cereals market as a result of the war in Ukraine. Nor has the Commission identified the damage expected from its decision. In fact, at the very least, with the ban imposed on Russian products, the weakness of industrial food production has become even more evident.

Since sustainable farming does not utilize chemicals, the war does not impact it, but it poses a grave concern for those using nitrogen, potash, and phosphate-based fertilizers, with prices already skyrocketing because of the energy costs. This fact should make policymakers think about reducing EU dependence of high energy input chemicals which are mainly imported from abroad (i.e. some 50% of nitrogen-based fertilizers used in the EU come from Russia).

Taking further into account that livestock consumes about 60% of cereals produced in Europe, reducing vegetal protein ending up in animal feed would be a rational and effective strategy. According to the Institute for European Environmental Policies, it could result in freeing some 23 million tonnes of cereals (by reducing poultry and pig farming by 15% and beef and dairy by 5%).

Contrary to this, nearly all EU Member States have drafted their Common Agriculture Policy (CAP) strategic plans devoting around 70% of the funds allocated to livestock sector. Even worse, some Member States have expressed a willingness to make available set-aside lands for crops, using the excuse that the Ukraine crisis requires the EU to increase production at any cost.

While these scattered areas are of little production and agronomic importance, they do represent the starting point for enhancing habitats and raising biodiversity. If these vital areas are used for crops, years of slow recovery will be wiped out with very little, if any, tangible benefit to EU cereal production.

It is further worth considering that while calling for a rise in food production, the EU is struggling to gain any meaningful results in food waste and loss prevention, with the amount of wheat wasted in the EU approximately half of the Ukraine’s wheat exports, and a quarter of other grain exports.

On the other hand, the fact that producing food more sustainably would cause a rise in costs is an issue we cannot ignore. While the Commission predicts a rise in food products, it neglects the issue of price levelling by leaving it to existing market rules and seemingly forgetting that in the end, the shelf price is largely the only consideration for most consumers.

As long as food is produced unsustainably, we won’t pay for the negative externalities, such as the environmental footprint (i.e. emission of GHGs, water depletion, soil degradation, water and air pollution, habitats and biodiversity loss, etc.). This translates to unfair competition with sustainable products; the complete opposite of a level playing field.

If we implemented organic farming on 25% of arable EU land, we could help bring down products’ shelf price for consumers, but even this may not be enough, simply because the higher cost is not due to an unbalanced supply/demand ratio. The issue lies at the root of organic production, in that it is designed to try and change the human and environmental hazard of most of our food coming from industrial production by interiorizing the environmental negative externalities. Because the costs deriving from those externalities are paid by taxpayers (through environmental remediation and public health system and care), they become a hidden cost for food produced unsustainably.

This monetary gap can’t be filled in any other way than charging for the cost of these externalities on the final production, so that unfairly low prices become economically unviable.

Furthermore, to ensure a level playing field with EU production, a border adjustment tax for imported products should be implemented. It is no easy task, though, because it must be fully embraced. Otherwise, the extra costs incurred from introducing prevention measures in agroecology practices and organic farming will continue to be the main driver for disproportionate inconsistency in food prices, and hence preventing the adequate and much needed market expansion of sustainable products. These market driven measures should be accompanied by other commitments at Member State level, aimed at reinforcing food sovereignty and agrobiodiversity.

A fair, sustainable and accessible food market for all is unlikely to be reached as long as staple grains are exposed to financial speculation at the Seeds Stock Exchange, and as long as patents are granted forplant and animal varieties including those obtained through natural cross-breeding practices.

Finally, it’s worth remembering that a sustainable food production system should also ensure respecting social aspects and labour rights, which are sometimes neglected even in the case of organic farming.

Especially in this time of crisis, it would be wise to start a holistic reflection on the state of our food system and focus on the fact that cheap food, agriculture commoditization, plant patenting and seed market financial speculation are at the root of most social and environmental failures in the sector.

A committed food policy at EU level should include the entire package, and legislators should take bold and robust action to ensure food production is safe, sustainable, accessible, not commoditized and shielded from financial speculation.

The research should be conducted in a way to support scientific advancement through open-source projects and databases, such as Wheat MAS in USA looking for a wider share of benefits to come from the sustainable use of biotechnologies and knowledge in molecular biology and genetics.

Considering all criticality factors, it is clear the food system would benefit from “rethinking”, rather than “optimising” where social values replace pure financial benefits at the core. Therefore, we are convinced that the economic model applied to food chain production plays a significant role in the final food market features.

The Co-operative economic model could offer higher guarantees of worker rights, shared benefits, equality and holistic sustainability, because the core business operations are based on principles and led by values, thereby maximising benefits for the individual consumer-members (who are the owners of the business) and their communities, while being economically viable.

Consumer co-operatives have been at the forefront in adopting frontrunner measures which are always steps ahead of the strict legislation requirements on food safety and sustainability.

Being owned by consumers, co-ops have a direct and strong interest in ensuring food safety and sustainability. This is why Euro Coop strongly supports the call for the Commission to keep on track and ensure the EU food production resilience by raising sustainability ambitions even further in a crisis period which exposes our Bloc’s vulnerabilities.