On 23 January, Euro Coop hosted in Brussels the Roundtable ‘Ethically Sound Supply Chains: A Consumer Co-operative Perspective’ in partnership with the Vice-President of the European Parliament Heidi Hautala. The moderator, Euro Coop Deputy Secretary-General Rosita Zilli, opened the event by welcoming all speakers and participants. She briefly presented Euro Coop, the European Community of Consumer Co-operatives, by recalling that it brings together the national consumer co-operative movements in 19 European countries, which operate 76.000 points of sale and are owned by and serve 34 million consumer-members daily. Different from other private retailers because of their specific governance model, consumer co-operatives have sustainability embedded in their DNA, hence the willingness to shed more light on the issue of human rights and supply chains. 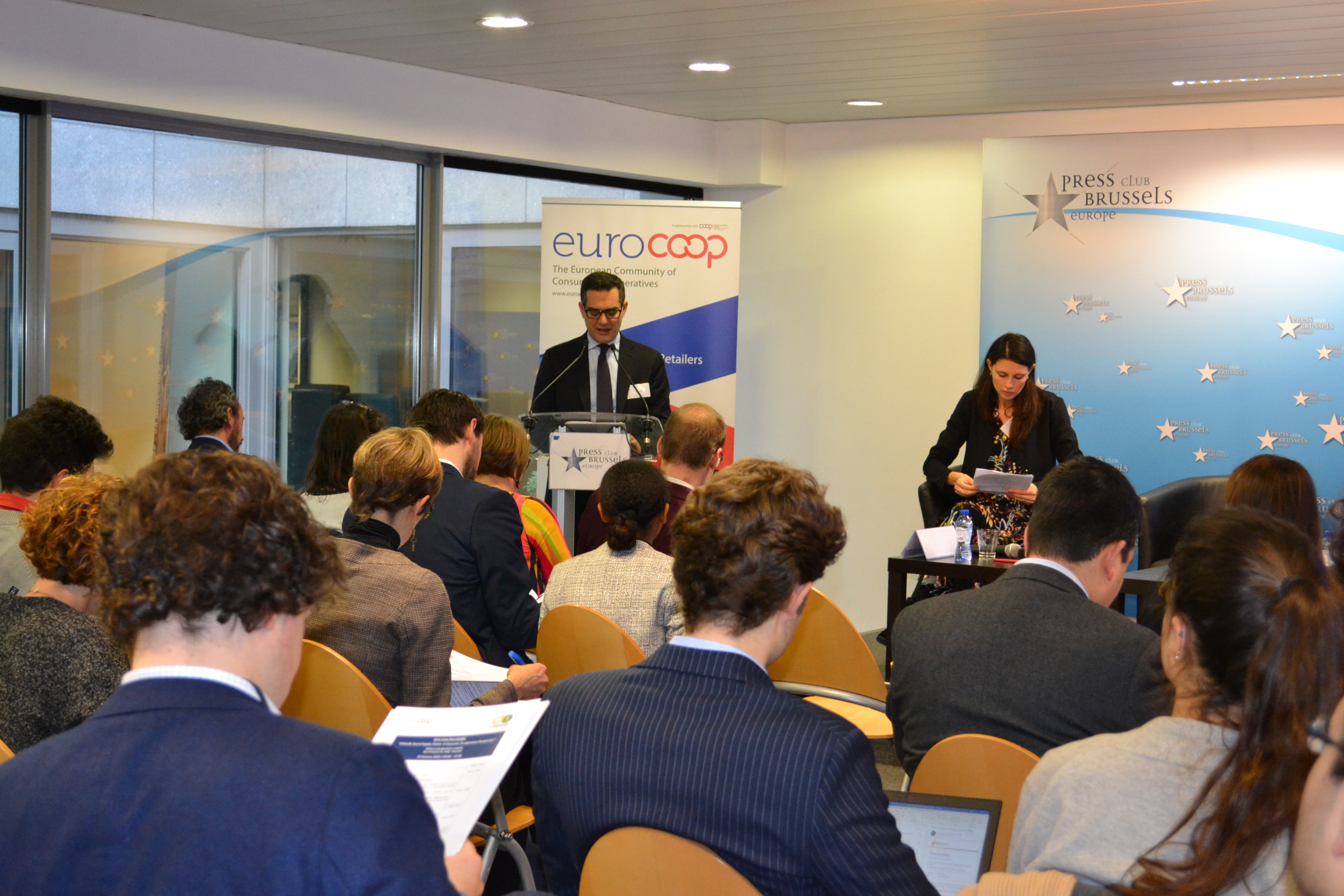 Euro Coop Vice-President Albino Russo made the introductory remarks and stated that: “Consumer co-operatives are enterprises which operate on a well-established set of values and principles including sustainability and care for the community. This is why ethical supply chains are core to our business.” He then continued by saying that, even if efforts to make progress on this topical issue have multiplied in the last years, much remains to be done and presented the roundtable as an occasion to both showcase consumer co-operatives’ best practices and learn and exchange on ways to bring the battle forward. He concluded by warmly thanking Vice-President Hautala for the great work she does in her capacity of founder of the European Parliament Working Group on Responsible Business Conduct, as well as for her continued support to Euro Coop in the organization of the roundtable.

Ethically-Sound Supply Chains in the Eyes of the EU Institutions

In her intervention, Vice-President Hautala highlighted the political momentum shaping up at EU Institutional level to tackle this thorny issue and acknowledged consumer co-operatives’ key role: “The co-op movement is in the 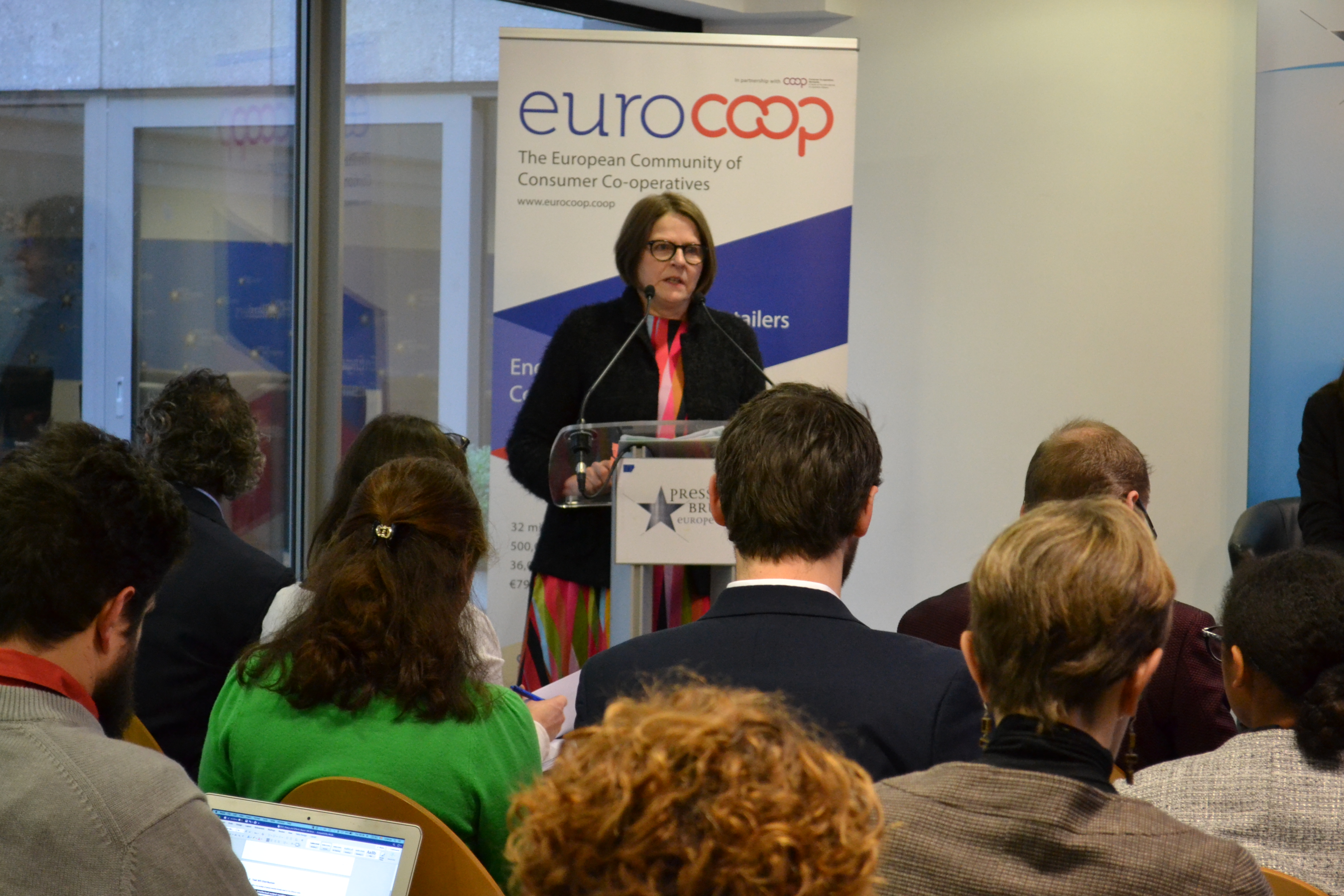 forefront because its point of departure on social and societal issues is much higher, keeping in mind that the environment is a natural extension of this responsibility". She added that "consumer co-operatives have developed best practices, with which they engage consumers on the importance of the issue and send a clear message to policy-makers of the need of a level-playing field, because responsible operators should not be outperformed by the irresponsible ones". Human rights issues in supply chains are often interlinked with environmental ones, hence the need to take a combined approach encompassing the two aspects when drafting any legislation. The patchwork of legislation on human rights and supply chains across the EU bloc was pointed out as something to fix in the future as the importance of enforcement and implementation because laws are only as good as they are really effective on the ground.

The European Commission’s view was presented by Maija Laurila, Head of Unit for Company Law within DG JUST, where it emphasized that existing laws are not sufficient to implement what the President of the European Commission Ursula von der Leyen calls the “competitive sustainability”. Rather, sustainable investments with a long-term vision need to be integrated into corporate governance. Ms. Laurila then referred to two studies assessing how limited liability companies are dealing with the issue of human rights in supply chains and hinted that much more work is required for any real progress forward. The so-called “smart mix” would include clear parameters, transparency, policy coherence and a transitional period for companies to adapt.

The EU Institutional perspective concluded with the contribution of Maria Nikolopoulou, a Member of the Trade Union Confederation of Workers’ Commissions at the European Economic and Social Committee (EESC). Ms. Nikolopoulou focused on the need for the concept of sustainability to converge with that of the UN SDGs in order for it to be more holistic and encompass several dimensions beyond the environmental ones. Consumer co-operatives were recognised as a key enabler for an economy which is viable for the people and for the planet and thus, academic curricula on national level should include teachings of the co-op model. The European Commission and the European Parliament were called upon to work jointly on a comprehensive blockchain initiative which takes into consideration also the SDGs.

A short Q&A session followed. Before giving the floor to the audience, the moderator addressed the European Commission by highlighting the co-operative movement’s challenges at EU level due to the lack of real acknowledgment and recognition, mainly due to the lack of a dedicated unit for co-operatives. The current institutional set-up focused broadly on the social economy, thus diluting the distinctive co-operative model and its advantages.

The ensuing debate with the audience focused on the opportunities of the Green Deal to make good progress on the issue of human rights and supply chains, the need to work across the sectors as well as to implement a true level-playing field for enterprises which operate on the market in a sustainable way not to suffer competition from those who do not.

Lea Rankinen - Senior Vice-President of the S-Group Finland and AMFORI Vice-Chair presented the long journey on the issue of human rights and supply chain in Finland. It all started with an honest look at how their operations were conducted. This resulted in a comprehensive and systematic approach completed with targets, a scientific attitude to data gathering and elaboration, a “radical transparency” state-of-mind, and a multi-stakeholder partnership to bring everyone on board. To conclude, she called for mandatory legislation on due diligence and stressed the importance of effective implementation. 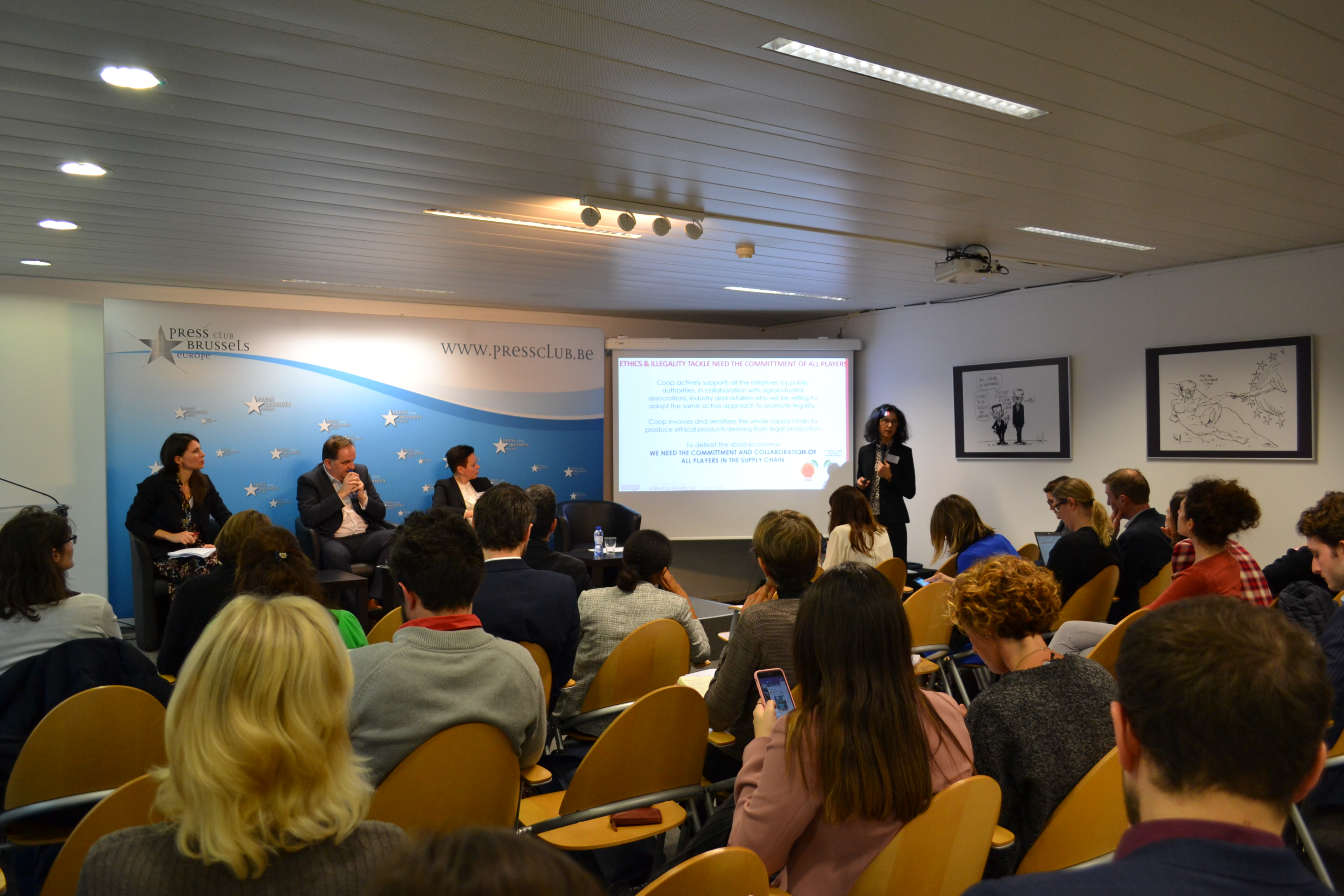 Chiara Faenza - Coop Italy’s Responsible for Sustainability and Values Innovation presented Coop Italy’s flagship initiative “Buoni & Giusti” (“Good & Fair”), aimed at tackling gangmastering in some critical fruit & vegetables supply chains in Italy. The project’s success was based on numerous factors, such as involving the whole supply chain, stepping up legislative enforcement and the use of new technologies like blockchain as critical elements. One key drawback identified is the fact that businesses that try to bring forward a positive change receive no stimulus, thus making it difficult to compete with an illegal system that is nevertheless extremely efficient. Key to success is also the good co-operation with farmers, to whom Coop Italy guarantees a fair price. Coop Italy also set-up the “Network of Quality Agriculture Work”, to which it asks its agricultural suppliers to adhere to certain principles imbedded within the concept of “Buoni & Giusti”.

The UK experience was provided by Paul Gerrard - Director of Campaigns at The Co-operative Group. Their broad ethical trade programme is based on a clear set of policies and standards to which all suppliers need to abide, combined with strict audits running on an ongoing basis. He flagged the pioneering work of the enterprise with the Fair Trade movement and the emphasis which is given to long-term relationships with suppliers. He then presented the “Bright Future” programme for the victims of modern slavery and the success it has in helping people in need coming out from the slavery condition and start building a new life. He finally mentioned the fact that compliance with the law has currently an economic consequence whereas lack of compliance does not, and called on the lawmakers to act to change this. He also pointed out that acting on public procurement policies would also be critical to make the shift. 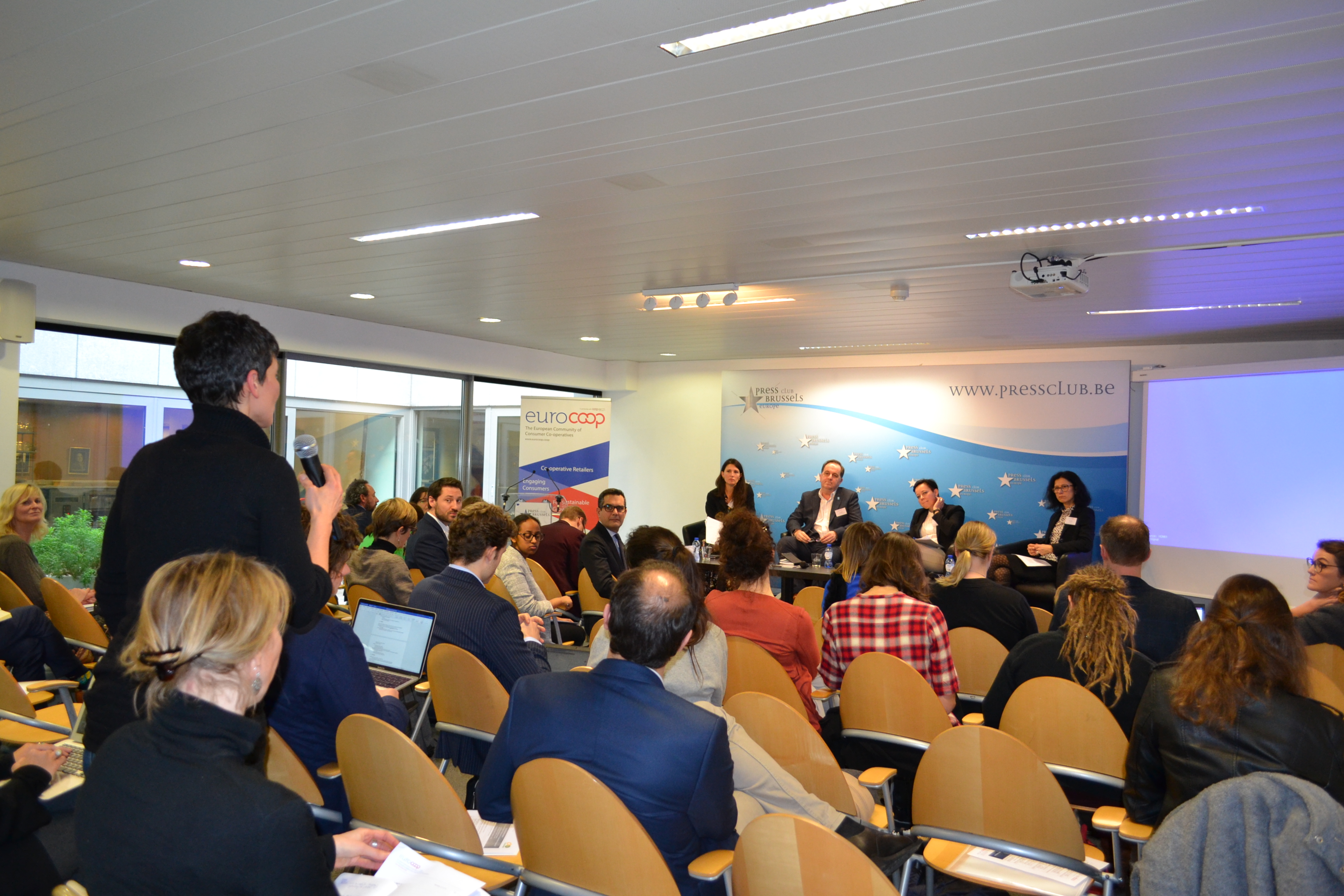 The Q&A session which followed saw a strong recognition for the work done by consumer co-operatives across Europe and many called for the co-operative model to be further recognised as a key enabler for sustainability in supply chains. Partnerships, the need for a level-playing field for virtuous enterprises not to suffer from unfair competition and a mandatory legislation coupled with strong enforcement measures where yet again at the centre of the debate. In closing the second panel, Rosita Zilli took the opportunity to highlight the good co-operation of consumer co-operatives with the farming sector, which is a distinctive point in relation to the situation of other private retailers and welcomed the courage of consumer co-operatives to deal with uncomfortable debates to bring about a wider societal change.

Industry & NGOs: Working Together for a Common Goal

The Fair Trade Advocacy Office Project Co-ordinator Fabienne Yver presented the Fair Trade movement as not only linked to the development and promotion of the homonymous label for food and non-food products but also to the fostering of fairness in trade at all levels. In her intervention, she stressed that voluntary initiatives to tackle human rights issues in supply chains have abundantly shown their limits and it is now time to go for mandatory legislation. She finally mentioned how price and delivery time get in the way of human rights and called for a collective reflection on this point. 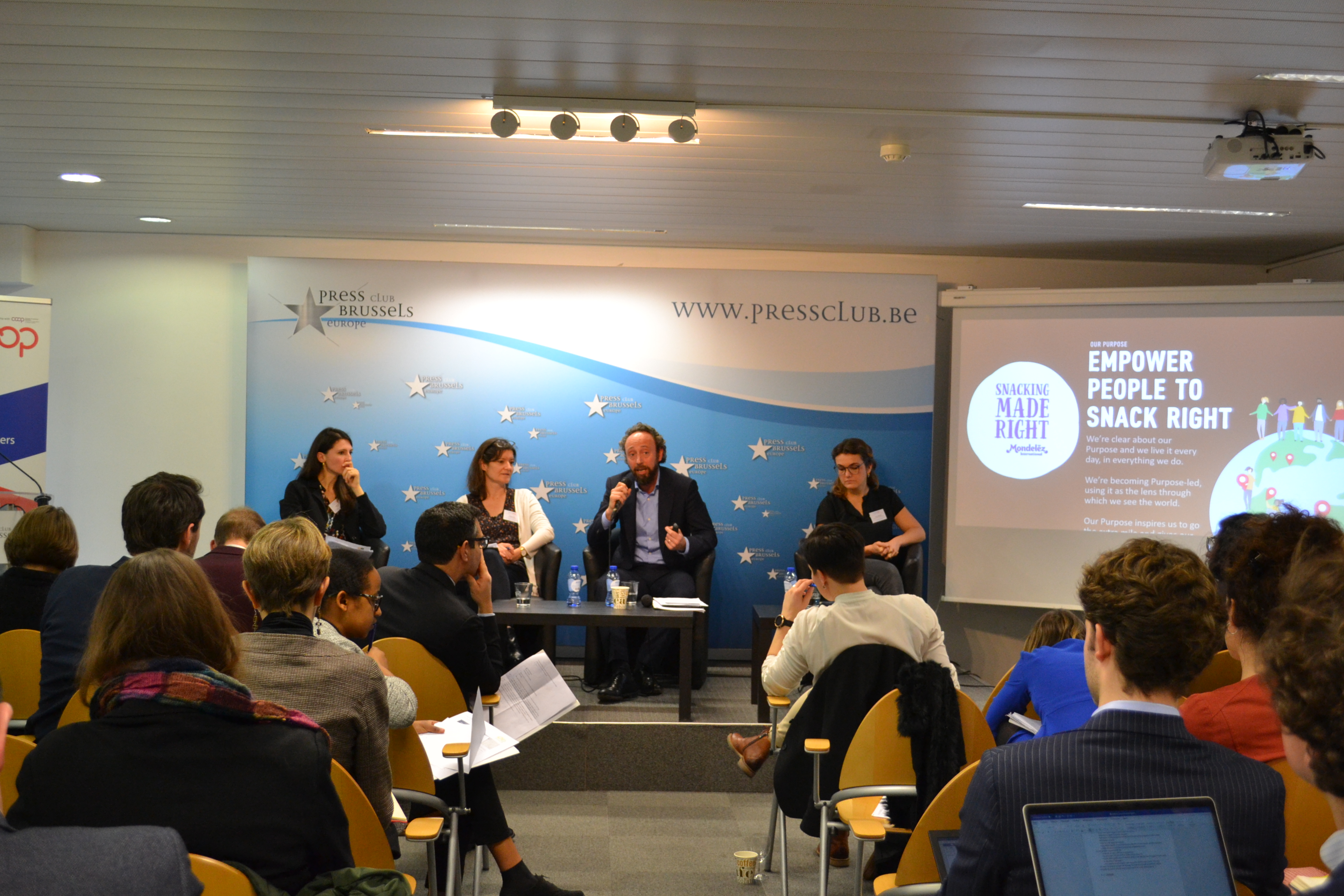 Patrizia Heidegger, Director of Global Policies and Sustainability at the European Environmental Bureau stressed the need to couple human rights issues also with environmental considerations and supported the call for a binding legislation on due diligence. She mentioned that a wide NGO coalition has come together for that purpose and that times are ripe to push this agenda through. Also emphasized was the importance to ensure that victims of human rights abuse have access to justice, which is only seldom the case. She concluded by highlighting the importance of an eco-design which also takes into consideration social aspects when conceiving a product.

The intervention of the Director of Global Public Affairs of Mondelēz International Francesco Tramontin closed the third and final panel. He spoke about transparency and purpose, two key elements which are now essential for enterprises to thrive and be rewarded on the marketplace. He highlighted the fact that times call for systemic changes and that enterprises need to react accordingly if they want to survive. He also emphasised the work carried out by Mondelēz International with farming communities, emphasising the importance of healthy partnerships along the supply chains.

The ensuing Q&A session focused on how the upcoming “Farm2Fork” Strategy could take on board the several points emerged during the roundtable, especially that of human rights. Ms. Zilli finally took the opportunity to highlight how it will be critical to work on what lies behind a product’s price, for it not to be a mere economic indicator but also to encompass social and environmental parameters which are currently externalised.

The operational conclusions were provided by Euro Coop Secretary-General Todor Ivanov who pinpointed the fact that solutions to complex challenges require combined efforts, 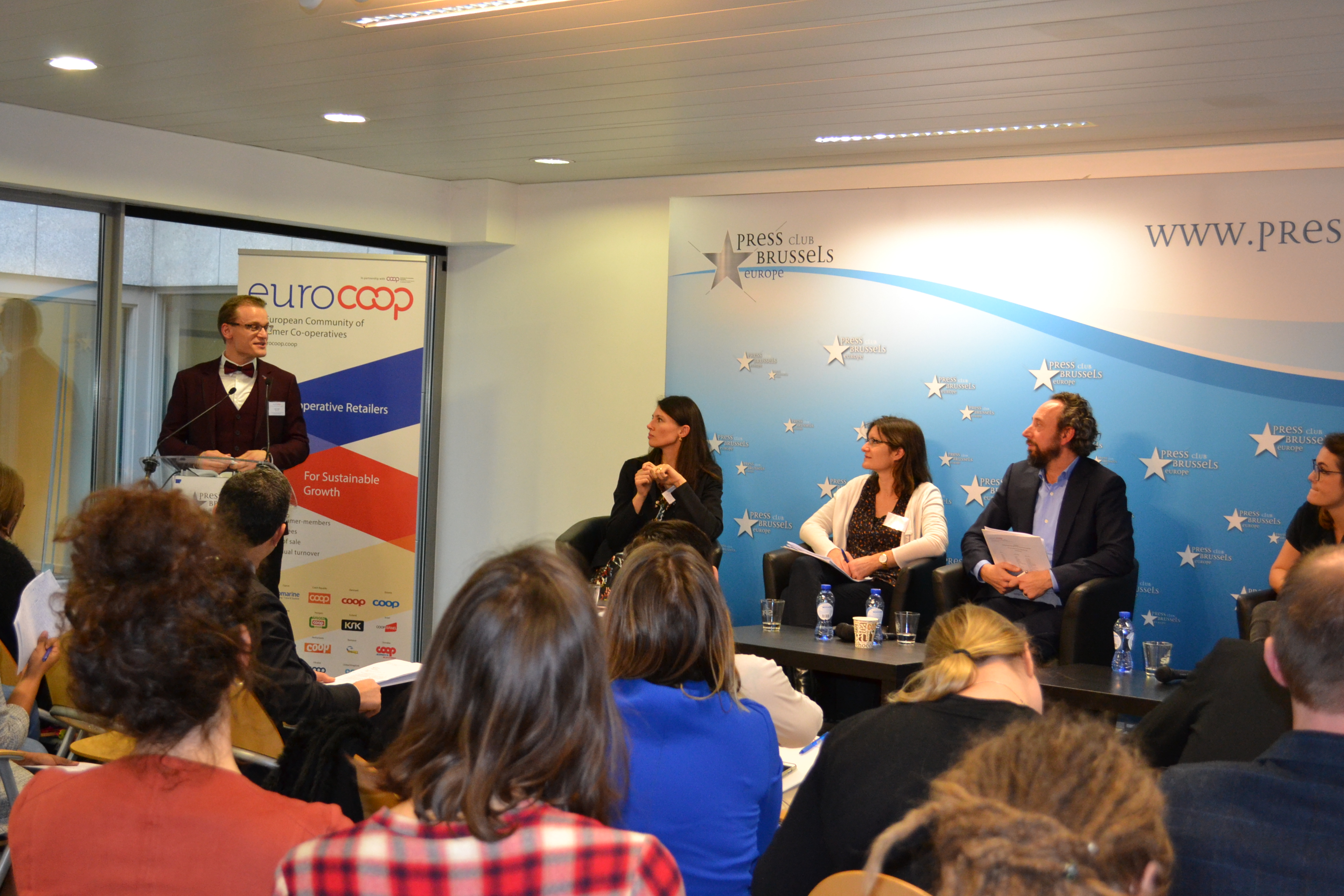 involving first of all the courage to deal with uncomfortable truths. This, together with establishing partnership along the supply chain, a “radical transparency” approach, mandatory legislation coupled with strict enforcement measures and a strong uptake of technologies like the blockchain are all part of the solution. He stressed the underlying leitmotiv of the roundtable – the co-operative difference – by stating that consumer co-operatives will keep on being key enablers of ethically sound supply chains because of their unique values-based business model and called on legislators to acknowledge this distinctive trait in shaping legislation.

Euro Coop Vice-President Albino Russo closed the roundtable by thanking all speakers and participants, with a special mention to the Vice-President of the European Parliament Ms. Hautala who supported the organisation of the event from the very beginning. Finally, he reinvigorated Euro Coop’s commitment to partner with all dedicated stakeholders in facilitating a paradigm shift towards a fairer, more sustainable and just economy and society; thus calling for a broader discussion on political level to make this become a concrete reality.