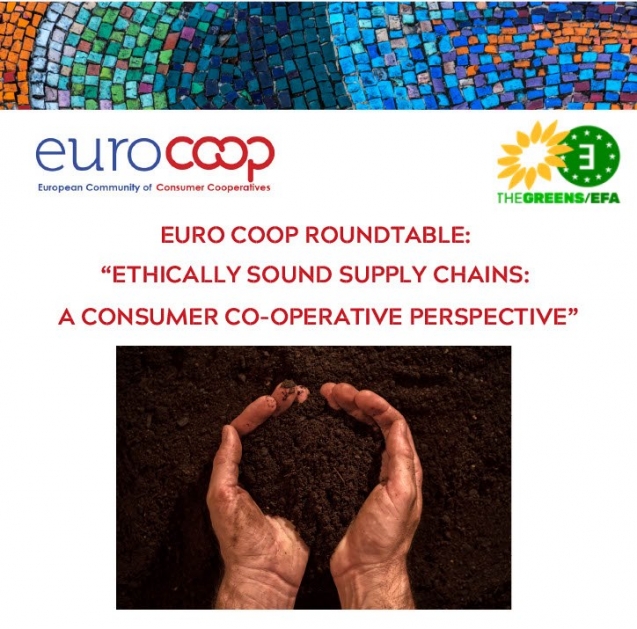 On 23 January, Euro Coop hosted in Brussels the Roundtable ‘Ethically Sound Supply Chains: A Consumer Co-operative Perspective’ in partnership with the Vice-President of the European Parliament Heidi Hautala. Consumer co-operatives were pinpointed as key enablers of ethically sound supply chains because of their unique values-based business model.

Euro Coop Vice-President Albino Russo opened the event by stating: “Consumer co-operatives are enterprises which operate on a well-established set of values and principles including sustainability and care for the community. This is why ethical supply chains are core to our business.” Consumer co-operatives in the room highlighted how the solution passes through a series of combined actions involving first of all the courage to deal with uncomfortable truths. Best practices shared included co-op’s quest for radical transparency in their supply chain, scaling-up of technology and applying broad co-operation and building committed partnerships with suppliers in bringing about the change.

In her intervention, Vice-President Hautala highlighted the political momentum shaping up at EU Institutional level to tackle this thorny issue and acknowledged consumer co-operatives’ key role in bringing it to the next level: “The co-op movement is in the forefront because its point of departure on social and societal issues is much higher, keeping in mind that the environment is a natural extension of this responsibility". She added that "consumer co-operatives have developed best practices, with which they engage consumers on the importance of the issue and send a clear message to policy-makers of the need of a level-playing field, because responsible operators should not be outperformed by the irresponsible ones".

The Roundtable was the occasion for all contributors to ask for mandatory legislation on due diligence, with a shared pledge to intensify pressure at enforcement level - the weakest correlated point. Public procurement was also in the spotlight, because of its strong potential to change the market for good. Finally, Euro Coop reinvigorated its commitment to partner with all dedicated stakeholders in facilitating a paradigm shift towards a fairer, more sustainable and just economy and society; thus calling for a broader discussion on political level to make this become a concrete reality.