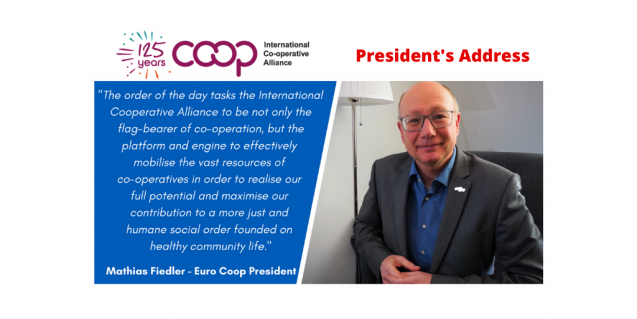 Today, we celebrate the 125th Anniversary of the International Cooperative Alliance!

On 19th August 1895, an international nucleus of co-operators, duly appointed delegates of national co-operative federations convened in London for the first International Co-operative Congress with the mission of establishing the Alliance. Before they dispersed, they agreed on directives for its constitution, functions and policy which reveal a recognisable correspondence with important features of the ICA today – an unwavering commitment to improving the daily lives of all co-operators and their local communities through the adherence of the co-operative principles, values and ethics.

Co-operatives exist in every branch of the economy worldwide. This makes the ICA one of the largest and oldest international non-governmental organisations. The co-operative model’s diversity of operations and sustainability of mission have drawn over 1.2 billion people to the global movement from over 300 national organisations in more than 50% of the world’s nations. We proudly provide 10% of the global employment and the co-operative economy is estimated at USD 2.7 trillion, which ranks as the 7th biggest economy in the world.

The foundations of the modern movement were laid in the period of post-industrial revolution when people were faced with the extreme side-effects of industrialisation, such as rabid poverty and inexistent food security. From its emergence, co-operation was propelled forward as a technique of solving a problem, such as improving the lives of the ordinary people in a fair and transparent manner – a stark difference to the uncontrollable competitive capitalism of that time.

This mission is embedded in our DNA and destines the behaviour, attitude and relationship of and within all co-operatives worldwide.  The truth is simple. The attempt to solve common problems by combined action is the essence of co-operation, which is one of the forms of mutual aid characteristic of modern times.

Spanning three centuries, our movement’s status is commensurate to the practical necessity of co-operatives in remedying global challenges and/or their repercussions of various forms – economic, social, environmental, cultural, even military. 2020 proved yet another year of rising turbulence which has put economies in a knock-down situation and the forecasts are not looking bright. Ordinary people are being pushed against the wall and the well-being of local communities is at a risk. All this in the context of rising environmental problems, escalating global poverty, growing international uncertainty and the instability of food systems.

Just as 176 years ago, there are developing conditions for the increasing necessity of finding solutions to common problems.

This can be accelerated by decision-makers’ realisation of our shared responsibility – namely, improving the lives of the people, and by their implementing an adequate legislative, policy and business environment for co-operatives on national and international level, which include the removal of any barriers facing co-operatives’ economic operations.

The order of the day tasks the International Cooperative Alliance to be not only the flag-bearer of
co-operation, but the platform and engine to effectively mobilise the vast resources of co-operatives in order to realise our full potential and maximise our contribution to a more just and humane social order founded on healthy community life.

On behalf of Europe’s consumer co-operatives, I salute the International Cooperative Alliance for this 125th Anniversary and pledge our readiness for closer co-operation to the benefit of our members and society at large.

Co-operatives and Youth: Empowerment, Employment, Engagement After the success of...

Eroski's growing membership - putting members at the heart of co-op

With 7 million members and holders of Eroski member cards, Eroski reports a 15% increase in...